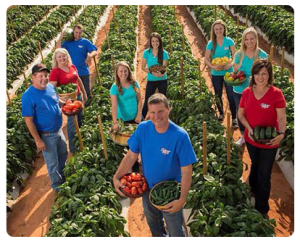 The Patterson Family has been in the produce business since James A. Patterson began growing vegetables in 1919.  By 1941, James’ crop consisted of about 30 acres of cotton and three acres of tomatoes.  Boll weevils damaged most of his cotton crop that year so James decided to grow all 30 acres in tomatoes the following year.  In 1946, the family began growing tomatoes commercially under the name, James A. Patterson & Sons.

James and his wife, Berta Catherine Cauble, had 5 children, Betty Lou, Frank, Carl, Ann and Nancy. Sons Frank and Carl decided to continue the family business after each graduated from NC State and served in the Army.

On August 17, 1957 Carl married his sweetheart, Phyllis A. Graham. Her father, Harold Graham, along with his 12 siblings were involved in the dairy business. The current Patterson Farm Market & Tours location is on part of the original Harold Graham dairy farm.

Carl and Frank farmed together until they decided to divide the farm in 1979. Carl and Phyllis formed Patterson Produce and Plant Farm. They raised tomatoes, strawberries, corn watermelons and cantaloupes as well as four children; Lisa, Randall, Douglas and Michael.

In 1982, son Randall returned to help the family farm after graduating from NC State with a degree in Biological and Agricultural Engineering.  He helped implement on the farm the new procedures developed by NC State called “Plastic Culture” which involves growing crops on raised beds using drip irrigation with black plastic.  Randall is primarily responsible for all field operations on the farm.

In 1992, the farm incorporated and became Patterson Farm, Inc.

In 1994, son Douglas and his wife, Michelle, decided to move back to the farm to help with the family business. Doug graduated in 1987 from NC State with a degree in Mechanical Engineering and had worked for 6 years in this field.

Since 1919, the Patterson Farm Family has been committed to growing the freshest, highest quality fruits and vegetables for our hometown community and beyond. Our produce is available at our on the farm market, Patterson Farm Market & Tours, Inc., as well as many fine retail grocery stores and restaurants. Look for our Patterson logo and ask your local grocer for our produce.

Patterson Farm grows and packs produce for grocery stores, wholesalers, fresh markets and other outlets.  With over three-quarters of a century growing and packing a variety of produce, we understand quality.

Patterson Farm Inc. has the facilities to grade, pack, and ship our produce all over the East Coast, from Canada to Puerto Rico.